Exploring parks and nature reserves is a wonderful way to become acquainted with the landscape and wildlife of the region! Travel to some of the places below to experience large expanses of pristine habitat.

Parks and Reserves from West to East 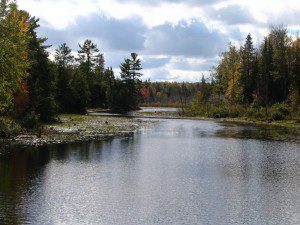 Parks and Reserve lands provide opportunities to explore and experience all that the land has to offer: diversity, richness, spirituality, recreation and solitude. Together with other private lands in natural cover, a “protected areas network” is growing, from which we can derive many benefits including enjoyment and sanctuary, both today and in the future. The Land Between has a large park systems and land holdings by conservancies and groups, including the first Night Sky Preserve in Canada!

A sample of key destinations are listed from west to east, and are just a few of the many areas which feature the natural wonders of The Land Between:

Severn River Conservation Reserve  A tract of wilderness forest, barrens and linear lakes that provides a taste of the north at the edge of southern Ontario.

Butler/Roehl Wetland Reserves  Owned and managed by the Couchiching Conservancy, these two reserves near the south shore of the Severn River protect Eastern Massasauga, Five-lined Skink, and other rare species.

Fawcett Nature Reserve  In Washago and owned and managed by the Nature Conservancy of Canada: located just west of Highway 11 on the shore of the Trent-Severn Canal, this reserve features several types of wetland and diverse bird life.

Prairie Smoke Nature Reserve  Owned by the Nature Conservancy of Canada. Near the village of Dalrymple, this 700-acre reserve has a parking area and trails leading into limestone forest and classic alvar communities.

Carden Plain Designated as an Important Bird Area (IBA) by Birdlife International. It is a favourite destination for bird watchers and botanists alike. Here you can see populations of grassland birds, colourful wildflowers, unique bugs and butterflies. Most of Carden is private property, yet birds are easily spotted from the side of the road. The Carden Festival is held each summer. Lead by the Couching Conservancy, Carden Field Naturalists, and Orillia Field Naturalists, the event attracts visitors from all over Ontario and beyond. Birding tours, canoe trips, butterfly tours, and instructional workshops are offered.

Altberg Wildlife Sanctuary Nature Reserve  The largest nature reserve of Ontario Nature at 300 acres, the Altberg Wildlife Sanctuary Nature Reserve is stewarded by the Kawartha Field Naturalists. The reserve is situated at the contact zone of the granite barrens and limestone plains; the core of The Land Between. Because of its position, the reserve hosts a diversity of communities such as marshes, wet meadows, swamps, forests and old fields. Interior forest, uncommon in this area, provides habitat for Red-shouldered hawk, Hermit Thrush, Veery, Least flycatcher, Ovenbird, and a many Warblers. Also deer, moose, bear and beaver find shelter here. To the east of the reserve, Somerville Tract, a City of Kawartha Lakes Agreement Forest includes a popular cross-country skiing area. www.ontarionature.org/enviroandcons/reserves/res_altberg_wild.html

Hardy Lake Provincial Park   Rare habitats such as a displaced section of Georgian Bay shoreline and communities with Atlantic Coastal Plain species are present in this park, typifying some of the unique elements of The Land Between. Hiking trails, maintained by the Muskoka Lakes Trails Association are available, as too is canoeing.

Queen Elizabeth II Wildlands  This park is unique to Central Ontario as it is large (at 35,505 hectares), diverse and mainly undisturbed. Found in the western portion of Haliburton County, and the northern part of City of Kawartha Lakes, the area is used for recreation with many trails, including a portion of the Ganaraska Trail. The Park has more than 50 landforms including sandy deposits, rivers and wetlands, and the granite barrens and limestone plains typical of The Land Between.

Indian Point Provincial Park  Immediately adjacent to Balsam Lake, near Coboconk, this park is undeveloped, and features a rare alvar, limestone plains and a gorgeous shoreline.  Water access is available from Balsam Lake.

Kawartha Highlands Signature Site Provincial Park  This is the largest park in Ontario south of Algonquin Provincial Park. Kawartha Highlands encompasses 37,587 hectares.  It extends north in Peterborough County towards the town of Apsley in Hastings County. The park lies along the core of The Land Between transition zone and so contains granite outcrops from the Shield, as well as limestone plains of the St. Lawrence Lowlands.  This picturesque reserve has an undulating landscape with barrens, rock scarps, small lakes, wetlands and pristine forests.  Traditional activities and low-intensity recreational opportunities such as hiking and canoeing are available.

Wolf Island Nature Reserve and Big Sandy Bay Conservation Area  Limestone plains against granite bedrock are featured on this island, as it sits centrally in The Land Between. The island is accessible by foot from the Lovesick Lock. There is no road access. The island diplays a diversity of vegetation and habitats, including swamp forests, mixed forests, and barrens with scattered trees and shrubs. Hiking trails are present. For safety reasons, swimming is prohibited near the locks and dams of the nearby Trent-Severn Waterway.

Silent Lake Provincial Park  Silent Lake is landlocked and pristine. It has marshes and mixed forests great for viewing wildlife by boat or trail. Trails are available for skiing and mountain biking.

Bon Echo Provincial Park  This park north of Napanee is renowned for Mazinaw Rock. This 1.5-kilometre sheer rock face rises 100 metres above Mazinaw Lake, one of the deepest lakes in Ontario, and features the largest visible collection of native pictographs in Canada. The park boasts fabulous adventures in this hiking and canoeing, and features include beautiful lakes, sandy beaches, granite outcrops and lush green forests.

North Frontenac Park Lands Just north of Highway 7, and west of Ottawa, the Crown Lands in north Frontenac host a system of roads and trails, superb waterways, incredible lakes and campsites. The lands are at the near-shield and so the northern transition zone of The Land Between. The Mississippi River Canoe routes extend through these lands and include Crotch Lake Conservation Reserve and Hungry Lake Conservation Reserve, one of the largest, relatively undisturbed granite bedrock barrens in the area and featuring the northernmost limit of savannah-like forests containing white oak.

North Frontenac Dark Sky Preserve A new preserve to see the milky way and maintain biodiversity in The Land Between. Night skies are essential for biodiversity and human health and are  often an overlooked part of habitat. This area is complete with observation pads and amenities. Managed by the township.

Elzevir Peatlands are known for having one of the largest continuous peatlands in southern Ontario. A great site to view bog affinities and Atlantic Coastal Plain species.

Mellon Lake Conservation Reserve has bare rock ridges and deep valleys. It is linked to the Kaladar Jack Pine Barrens and Puzzle Lake. These habitats shelter rare species such as the Prairie Warbler and Five-lined Skink. Kaladar Jack Pine Barrens Area of Natural and Scientific Interest contains five types of rock barrens and multitudes of beaver-controlled wetlands. This area is at the southern limit for Jack Pine in Ontario. Puzzle Lake Provincial Park includes a variety of habitats from juniper rock barrens to bogs. Puzzle Lake is one of the most diverse areas in eastern or southern Ontario for rare species.

The Salmon River alvar (Area of Natural and Scientific Interest) is one of Ontario's richest alvars in terms of plant species, and is home to Canada's only known population of Juniper Sedge.

The Roblin Hell-holes (Area of Natural and Scientific Interest) are found on the limestone plain and at the edge of the Salmon River. Here glacial erosion and ground water have created caves, springs and underground streams.

Menzel Centennial Provincial Nature Reserve and West Plain Mud Lake Fen Area of Natural and Scientific Interest is situated at the headwaters of Otter Creek, 17km northwest of Napanee. The reserve and specifically Mud Lake Wetland contains one of the most extensive open and treed fens in southeastern Ontario. According to the Ontario Ministry of Natural Resources and Forestry, which leads wetland evaluations and programming in Ontario, "Fens are Peatlands that are poorly drained, but slow internal drainage does occur. Dominant vegetation is sedges, but shrubs and sparse, short tree growth may be present. Waters are circumneutral or only slightly acid. Three basic types are found. (a) Graminoid Fen - Open, sedge covered fen, with less than ten percent (10%) cover of shrubs or trees. (b) Low Shrub Fen - Open fen dominated by shrubs such as leatherleaf and dwarf birch less than 135 cm high. c) Treed Fen - Canopy cover more than ten percent (10%), usually tamarack, and usually not of merchantable size. " We can generalize that in central and northern Ontario fens are very similar to bogs; they are sphagnum dominated, but are less isolated with some movement of water to bogs, and therefore with a few more nutrients to support few tree species such as Tamaracks or black spruce. Fens found on calcareous parent rock to the south have neutral waters and soft substrates with many grasses and sedges and so they mimic marshes more than bogs.

Matawatchan Provincial Park Locked in the Madawaska Valley, 75km south of Pembroke, this small reserve is situated at the edge of the Canadian Shield, in the northern transition area of The Land Between. It features a small valley, forests, marshes as well as a rare fen.